Parisian born singer/songwriter Marie Parie has always believed in her higher alien power. Raised by two Catholic Priests in France Ms. Parie has always identified herself as a alien resident on the Planet Earth.

Her first album "Alien Victory" drops this week. In the world according to Marie scoring this victory has multilevel meanings. The first and foremost one is, understanding the alien power within in us all and letting it guide you when you are unsure of where you should lead.

So, let's hear it from the self described gay man in a woman's body Ms. Marie Parie!

MS: Marie I know you think of yourself as an alien I'm guessing that's why your debut album is titled: "Alien Victory".

MP: Well, yeah (laughs) I believe there is a part of all of us that is an alien. That's where I come from, and the victory is that every single human being is capable of overcoming any situation.

MS: So how long has your debut been in the works?

MS: That's pretty standard. The alien theme is something that runs through all of your music including your hit song "Dating".

MP: When I was a child I was always calling myself and alien, and extraterrestrial. This is a thought that would always be in my mind and I had no idea why.

MS: I assume you will include your biggest hit "Dating" on the album.

MP: Of course! There is the English version and we did a French version. We wanted to combine the French and the American on the album. The heavy bass and heavy drums are American style, but melodic part of it is European style. 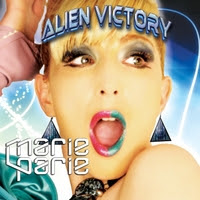 MS: Bringing the American and European version together on one album is an "Alien Victory" all it's own.

MP: I've always been fascinated with the "Two Sisters" relation between France and America, they have always been inside of each other in history. For example if you go to Normandy, FR there is so much American heritage there and if you go to Louisiana, USA there is so much French heritage. I've always thought how powerful it is to join two worlds together. Uniting two worlds, it's a victory, but to do that you need an alien force. There are so many layers to my album, but there is also the mystery of the alien world which I believe in. On all the planets there are creatures, and we are all part of each other, we are all one.

MP: On a personal psychological aspect of it, every person feels alienated for one reason or another. Because it is hard to comprehend this thing called a human. We place limits on ourselves as human beings and we have unlimited potential. In society it is hard to be accepted or belong, or feel like you are a part of something. There are a lot of layers on my album in regard to this, it brings it altogether it goes through all the emotions you could never imagine. It's my "Alien Victory" (laughs).

MS: OK, Marie break down your "Alien Victory" for everyone.

MP: Well it starts with "Dating" your dating right now and it feels good inside. Then it goes to "Playground" because the first stages of dating are all fun.

MP: "Playground" represents the mixture of danger and fun that "Dating" starts.


MS: So Marie, how does it all go from here? Will I like the ending to this novel?

MP: After those two stages you are facing the darkness and the light, it brings you to your beauty and your power. The alien in you gets you to do all of these things and you think: "Wow, I'm a miracle"!

MS: The suspense is killing me. How does it end?! Grrrrrrrrrrrrl please!

MP: There is "Lie To Me" the darkness has taken over. (laughs)

MS: Stop, been there done that, I could probably write that song.(laughs)

MP: "Lollipop" is when you become sexual again, you become a sex diva.

MS: Oh, here is my area of expertise. (laughs)

MP: So, "Dating C'est Toc" is dating the new side of you, the alien thing.

MS: I know I did not hit every single track, just the highlights, so Marie Parie, what about the final one? "Love Me".

MP: "Love Me" until I die, it ends that way. You're in love and embracing your inner alien.

Embrace your "Alien Victory" with Marie Parie at:

Posted by Michael Shinafelt at 5:43 AM