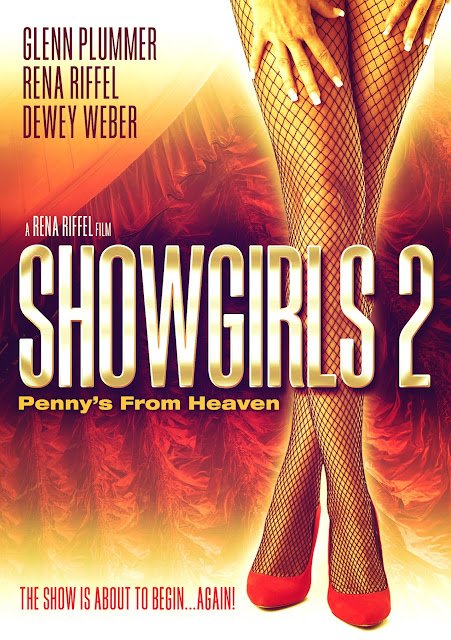 "They want class. They don't want to fuck a Penny" - Al Torres "Showgirls"

Well apparently Rena Riffel aka "Penny Slot" (wow that's one cheap jackpot) thinks you do. I received this press release in my in-box this ayem with the blaring headline:

"SHOWGIRLS 2: Penny's From Heaven"
on DVD and VOD September 17th

Uh, OK...I must say despite every fiber of my being is saying: "Don't do it, don't watch"!  Being a huge fan of the original "Showgirls" - "Yes" I have watched it twenty plus times, I feel quite compelled to go for it, no matter the consequences....Yep, I am a glutton for punishment when it comes to things associated with a fond movie memory...Read on and see what you think...

Let the show begin... Again! Original Showgirls star Rena Riffel has taken her screen time in the original cult classic and spun in into an elaborate, erotic spin-off featuring cat fights, murder, new quotable dialogue, and plenty of brown rice and vegetables in the film movies.com says "Goes to a manic superstar level all its own."
Joining Riffel are other Showgirls veterans, including Glenn Plummer ("Dexter, "Sons of Anarchy"), Dewey Weber, and Greg Travis (Rob Zombie's Halloween, Watchmen) as well as new recruits to the Showgirls legacy Peter Stickles (Shortbus, The Trouble With Barry), Shelley Michelle, Ford Austin and Paula LaBaredas.

Las Vegas stripper, Penny Slot (Riffel), sets out on an adventure to become the star dancer on a popular television show. With stars in her eyes, she tries to find the pot of gold at the end of the rainbow - but instead finds drama, danger and snuff movies in a town much more wicked than Sin City.

Penny's longtime fiance/boyfriend (Plummer) warns her that she needs formal technique training if she wants to be taken seriously as a real dancer, so Penny Slot sets out to learn ballet - but, she must pay the price to make it to the top.

There are sacrifices to be made at every imaginable level, and it all comes down to... How bad do you want it?

This special edition DVD release of Showgirls 2: Penny's From Heaven includes a commentary with Rena Riffel, deleted footage, behind the scenes and more.

Special Friday the 13th screening in Las Vegas (9/13/13)
https://showgirls2fridaythe13th.eventbrite.com
On Facebook: https://www.facebook.com/showgirls2
On The Web: http://www.showgirls2movie.com/

Posted by Michael Shinafelt at 10:05 AM