Yeah, whose going to win the gays or the, I don't know what to call these people, I hate name calling and judging, unlike the lawmakers in Arizona I will refrain from from something that shows a true lack of intelligence.

So what does one say? Let's let Eric Himan do it for us in an eloquent and intelligent manner. Eric wrote "Not Going Anywhere Tonight" in two hours while prepping for a concert in said state.

Eric rules! As a past interview subject and someone whose live performances I have seen, he is off the hook!

Hey Eric, keep on doing what you are doing and on behalf of grateful LGBTQ people out there, thanks for being you!

Keep up with "Super Eric" at: http://www.erichiman.com/

Posted by Michael Shinafelt at 12:10 PM No comments:

Pentatonix Wants To "Say Something"

PTX in the middle of their sold out United States tour in support of their latest CD: "PTX Volume 2" have managed to pop out a video for their cover of A Great Big World's "Say Something" featuring
Christina Aguilera.

Well  I sincerely hope you all  have some time where you can chill because it certainly seems like you never come up for air!

Hey Avi, Kirstie, Kevin, Scott and Mitch I'll be seeing all of you this Saturday March the 1st at The Orpheum in Los Angeles, Can't wait!

We are Pentatonix, hear us roar! http://ptxofficial.com/

Posted by Michael Shinafelt at 10:19 PM No comments: So the next time you see a white owl, get it to make some noise, and rock on with your bad self! Ha! kidding!

"White Noise Owl" is a band that's been there, done that, collectively toured the world, and individually snagged many awards along the way...blah-blah-blah.  Let's get serious, folks...you've heard it all before.

You know the players involved and nothing they can say will possibly prepare you for the impact that their labor of love will have on you this time.  The long distance connection that fused together the talents of Lo-Pro vocalist Pete Murray, newcomer Chris Shy, Snot bassist John Fahnestock, and drummer extraordinaire Will Hunt (who has played with everyone from Grammy winning superstars Evanescence to living legends like Zakk Wylde and Tommy Lee) is one that no P/R spin could ever capture.  The guys met for the first time in LA with mega-producer Ben Grosse (Breaking Benjamin, Disturbed, Fuel, Filter, and a myriad of others) at The Mix Room and famed East West studios for a few weeks to put their impression on their dream project.

The result?  "Until We Meet Again", a collection of unbridled energy from four guys who met for the first time while they recorded together.  After meeting every challenge thrown in front of them,  they are now poised to be the shiniest of dark horses the music world has seen in quite some time."


Indeed, if you like to rock, and rock hard - check out "White Noise Owl" and check them out now!

The single and title track "Until We Meet Again" is so money it is everything you could ever want in a rock power ballad.

And it's always classic metal time at the edge of the stage with my personal favorite track "Bomber."

Some come on everyone get loud and get yourself some "White Noise Owl" - and please try not to make the other color owls feel excluded just because they don't rock while you are at it.

Posted by Michael Shinafelt at 1:55 PM No comments:

Grace Valerie Lays It Down! "Not For Love" 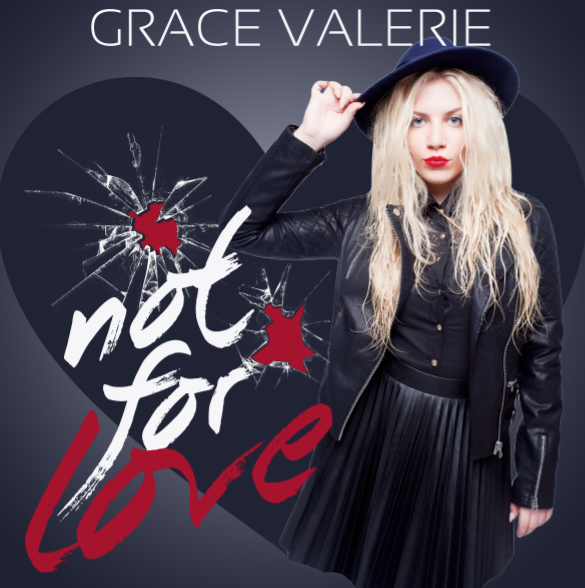 I've known the lovely and talented Ms. Grace Valerie since June 2011, when I first interviewed her for Chorus and Verse about her then hot single "When The Lights Go Down." Wow time flies!

She Tweeted me the other day with the video for her latest song "Not For Love" for those of you who are not familiar with her, you are going to love it! For those of you who are already fans, prepare yourself for a whole new side of Grace Valerie and this time it's personal. Grace stopped by "Entertain Me" for a quick chat about her latest, and some laughs, and here is what went down...

MS: Hey Grace, how are you?

GV: Hi Michael, it's so good to hear you.

MS: It was so great that you Tweeted me the video for "Not For Love" out of all the songs you have done, this is my favorite, it has an edge to it!

GV: Exactly! I love all my songs, but this is my favorite too!

MS: This song works because it is who you are.

GV: Yes, I have found who I am, as an artist I am growing.

MS: Are you still with Randy Jackson's label?

GV: I had a record deal with Randy and we did all of the songs we were supposed to do. This song was done by another producer, his name is Busbee, who has worked with Pink, Hunter Hayes and is producing Shakira's  new album right now. I've changed my music direction a little bit because I want to experiment and create different styles of music. To stay relevant you have to be open to new things.

MS: Absolutely! I loved the video by the way. (laughs) I didn't see that ending coming! (laughs)

GV: (laughs) That was the point. When we did that video we really thought about the story, we wanted people to watch it as a mini-movie. The ending was meant to shock people, no one would ever thought that the ending would be what it is. It makes me happy that you were surprised by it. (laughs) It was really fun creating the whole video.

MS: You shot this in Nashville, what was it like creating in the music capital of the world?

GV: It was exciting! I love the city so much! My first time there was performing last April, I met a lot of people there, including Michael Stryker the director of the "Not For Love" video. So, when I went back to Los Angeles I was really excited to work with the people I had met in Nashville. When we decided to film "Not For Love" my first idea was to go to Nashville and work with Michael and his team. It was a pleasure to work there, it was so much fun!

MS: A friend of mine went to work in Nashville for the first time a few years ago and she loved it!

GV: It's so great, the city is so soulful!

MS: Can you tell everyone any other fun things you have coming up in 2014?

GV: There are a lot of surprises including another track and another video. There will also be a tour that my team is setting up, also a press tour and radio tour. In fact this Monday I'm going to be on "Dirty Pop Live" the radio show Lance Bass has on Sirus Radio XM. I'm very excited about that and I will be doing an interview with him and singing live on the show. This is a little surprise for everyone because the only song I know I will be singing for sure is "Not For Love" you will have to tune in to hear what other songs I am going to sing. (laughs)

MS: (laughs) Well Ms. Valerie I think this song is going to do a lot for you, I see big things coming!

GV: Thank You Michael, I appreciate your support!

Pssssst, find out the twist ending and watch "Not For Love" here:

Posted by Michael Shinafelt at 8:19 PM No comments:

It's Durbinator Time! The Latest On James Durbin

Lyric Video For His Single, “Parachute” Debuts on Yahoo! Music


James Durbin has announced the initial dates for his upcoming 2014 acoustic US tour beginning January 3, 2014 at The Viper Room in Los Angeles.  The six week trek will end on February15 at The Catalyst in Santa Cruz.  Kelley James Kelleyjames.com will be direct support on all shows.  All confirmed dates listed below.

After a flurry of tweets poured through to twitter from fans wanting to tweet to unveil the album cover, James Durbin recently revealed the album cover artwork and full track listing for his sophomore CD release titled, CELEBRATE.  Wind-up Records will release CELEBRATE on April 8, 2014.

As previously announced,  James, who co-wrote 10 of the albums 11 tracks is busy putting the finishing touches on the 2014 release with producer Scott Stevens. The first single from CELEBRATE is “Parachute” and is available for purchase via iTunes here: https://itunes.apple.com/us/album/parachute-single/id738550728?ign-mpt=uo%3D4

The lyric video for “Parachute,” an homage to 80’s retro arcade games, made its premiere on Yahoo! Music and can be viewed on James’ VEVO channel on YouTube https://www.youtube.com/watch?v=VjgJCbV5rNE

All orders will automatically grant fans access to exclusive VIP opportunities with James (buyers will receive a special code allowing them early purchase for VIP opps and concert tickets).  All orders include an instant download of “Parachute” at http://shop.durbinrock.com/

“Parachute” is the first new music from James since his last two singles “Love Me Bad” and “Stand Up” were released in 2011.  “Love Me Bad” cracked the Top 30 at Hot AC/Top 40 radio while the anthemic NFL rock single “Stand Up” landed in the Top 20.  “Stand Up” was an official NFL anthem used on jumbotrons nationwide during the NFL’s 2011-12 seasons. Both tracks were featured on his debut release Memories Of A Beautiful Disaster which debuted in the Top 10 on Billboard’s Rock Album chart and #36 on Billboard’s Top 200 Album chart.   MOAB has sold over 120,000 copies to date and was named one of Billboard’s Best Rock Albums of 2012.

Posted by Michael Shinafelt at 5:46 PM No comments: