Rock Out With Your C#ck Out! It's "All Downhill From Here" 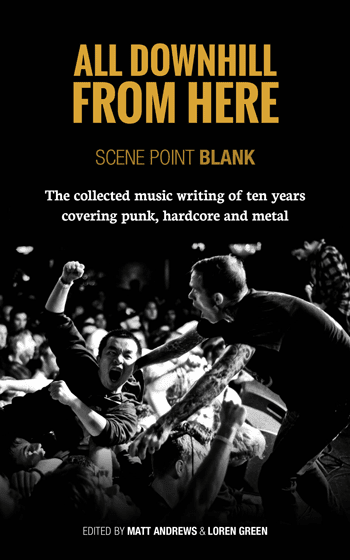 For all of you who love something other than pop music, myself in particular, this is the book for you.

It's February 1st 2014, I wonder if the groundhog will see his shadow tomorrow? If he does...It's "All Downhill From Here!"

In 2003, the AFI message board spawned a new webzine called Scene Point Blank. AFI were at the top of the charts, The Blood Brothers and The Locust were making waves in hardcore, and a young folk-punk band called Against Me! released As the Eternal Cowboy. The times have changed, but Scene Point Blank is stronger than ever, celebrating 10 years with All Downhill From Here, a new book that highlights some of their favorite material and includes insight on the wide-ranging cast of writers behind some of the webzine world's longer reviews.

Curated from 4000+ reviews and 200+ interviews, Scene Point Blank has put together some of their most popular items, some of their favorites, and their most memorable pieces into three formats: Kindle, eBook, and print, retailing from $7-15 depending on platform. Content includes interviews and features with Ian Mackaye, Henry Rollins, Larry Livermore, Evan Dando, Jacob Bannon, and many more.

Scene Point Blank isn't limited to punk and hardcore... They're proud of their varied content, ranging from blackened death to drone to hip-hop and even prog. They feel that music shouldn't be limited to genre and, in fact, discussing it in those terms is far too limiting. Their focus is on heavy, independent music, both the well-known and those just getting started.

After 10 years of online coverage, Scene Point Blank now offers All Downhill From Here to the public on a format they can carry with them and share,