Colton Ford, This Time It's Personal 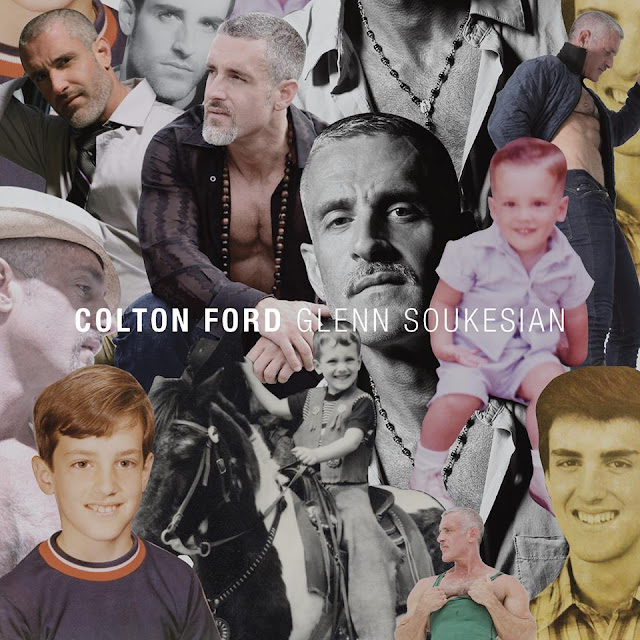 Once upon a time in Southern California there was a boy name Glenn Soukesian. That boy grew up loving theater and most of all, music.

Well it worked. After many hit singles and albums, Colton has hit his fans with his most personal CD to date, titled, what else? Glenn Soukesian. We met at Desano Bakery in Silverlake CA, to catch up and talk shop. Take note world at large and listen closely....

MS: You recently got back from Pride in Spain.

CF: Yes, it was really a good time, where everybody gay and straight were there to enjoy themselves and celebrate.It was a free spirited, accepting non-judgemental party with great energy, and everyone was carrying their alcohol and mixers in a bag and making their drinks on the sidewalk. A PARTY!! I performed three songs off of the new record for the first time which was awesome! People were there from allover Europe, it's really a great mix of people.

MS: I listened to your new music just before I got here.

CF: Right before you come and do your thing. (laughs)
MS: Yeah that way it's fresh in my mind. I love your current single "Free Yourself," it's pretty bluesy.

CF: Well I'm going back to my R&B/Soul roots. My roots  have always been in R&B/soul, something that's been present in all of my dance releases. But now, at fifty-three, I wanna do what I wanna do. I'm more of a bluesy crooner, ballad singer anyway. I took the opportunity to do what I felt. I worked with some amazing producers who get me. This is the first record where I didn't have to consider anyone or anything else.

MS: Did you self produce your current album?

CF: Yeah, the five people that I worked with, they wrote the tracks, I get the track and I write the melody and the lyrics. They produce the track and and I arrange and produce the vocals. Larry Peace did five of the tracks on the record, and he co-executive produced it with me. He was the DJ for Prince.

MS: Funny you should say that when I saw your song "R U Gonna" I thought of Prince because of the spelling.

CF: Yeah, yeah. (laughs) Now that guy is Eddie J Free who is another mixer/producer I did that and "True Love" with.

MS: I still can't believe Prince is gone. Fifty-eight is not old, especially since I'm fifty and your fifty-three, it really caught me off guard.

MS: Honestly I like this CD best out of everything you've done. I can hear how much more you are connected to the songs on this.

CF: Well Thank You. My EP "Next Chapter" was a nice segue into "Glenn Soukesian." This is more about the songs and the vocals and less about production. "The Way I Am" was a great dance album, but it was high in production. In terms of this album when you compare it to that one, it's much more personal.

MS: It feels that way.

CF: Totally more personal. It was a very liberating project.

MS: Something about it pops more to me.

CF: Cool, I love it! That is also the feedback I have been getting from people. Before I did the record I would see people posting: "We love your stuff, but we feel there's something else, and we look forward to what that is" and here it is. (laughs)

MS: And that's why the CD is named after you.

CF: Yes, my actual name. (both laugh) I really thought this through, a lot of people use my real name anyway because of the documentary about me "Naked Fame." It's about continuing that connection between Colton Ford and Glenn Soukesian. I'm in a place right now where I want to be as organic and true to myself as I can.

MS: The connection between music and sexuality is a strong one...sometimes people forget you have a great voice to go along with it. Miley Cyrus for example.

CF: She's amazing! She's got an amazing fucking voice! No Joke! If she wants to swing around naked on a wrecking ball, go for it!

MS: You lose sight of how good an artist is sometimes when that is the way they choose to express themselves.

CF: Well, I know I've experienced it, they judge you as if your doing that because your music is not strong enough. That's a bunch of bullshit. Some people actually do, but you can tell based upon the music who's doing it and who's not. Put the visuals aside and listen to the music and respond accordingly.

MS: One last personal thing, Glenn Soukesian. What is your favorite track off of your current CD?

CF: Well that's a hard one. Each song has a special meaning to me for a variety of reasons, both personally and artistically. I really love "Love's Around." Love the track, love the spirit of the song, the "you're not alone" message. And it's a universal love song. Could be to a friend, family member or a lover. It represents the personal relationships that I have. Loving, kind and supportive.