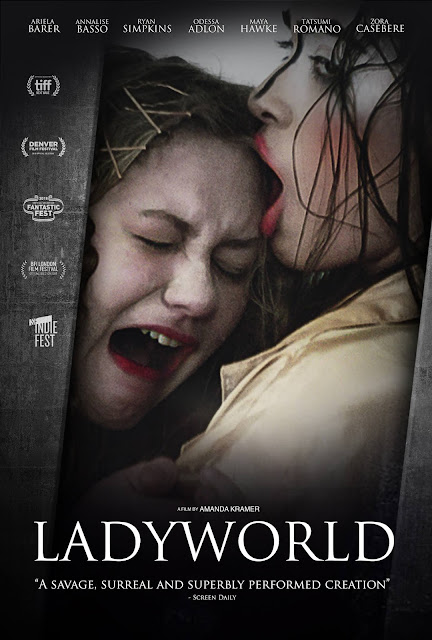 "In pairing the aftermath of a natural disaster with the minefield that is female adolescence, it proves its own surreal, savage and superbly performed creation."
- Sarah Ward, Screen International

In LADYWORLD, eight teenage girls become trapped in an endless birthday party after a massive earthquake. The girls' sanity and psyches dissolve as they run out of food and water. Eventually, they regress to their basic instincts, exploiting each other's fears and insecurities.

Cleopatra Entertainment will theatrically release LADYWORLD nationwide on August 2nd, followed by a VOD / Home Entertainment DVD release on August 27th.
Additionally, the film will have an East Coast Premiere on Friday, August 2nd at the Cinema Village, New York, NY and a West Coast Premiere also on Friday, August 2nd at the Arena Cinelounge in Los Angeles, CA with a Q&A with Director Amanda Kramer and cast.

Pre-order the DVD: https://mvdshop.com/products/ladyworld-dvd
Posted by Michael Shinafelt at 5:39 AM