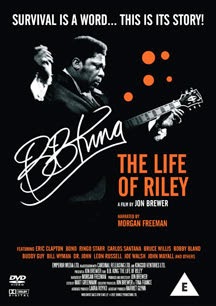 Cardinal Releasing Ltd., MVD Entertainment Group, and Syndctd Entertainment are pleased to announce the US release of The Life of Riley, the much-lauded feature documentary film on the extraordinary life of Blues legend B.B. King. The film will be in theaters nationwide starting on May 21st, on VOD June 1st, and on DVD, Blu-ray, and digital platforms on June 17th. Tickets for the theatrical screenings will go on sale beginning May 1st only at www.BBKing.com


King worked closely with Director Jon Brewer for 2 years to create this powerful film. The heartfelt contributions from a plethora of music's superstars were a vast indication that this was the time for his story to be told. At 88 years old, King, his family, friends and contemporaries unveil the true-life drama that was the springboard for the future 'King of the Blues'.

Battling unrelenting racism and the humiliation of segregation whilst working in the cotton fields as an orphaned child, Kinglived to overcome the toughest critics in the entertainment industry and ultimately be hailed as one of the kingpins of an entire genre of music. This candid biopic of the life story of one of our living legends is highlighted by rare archive footage and beautifully shot scenes of the deep American south. Informative and visually stunning, The Life of Riley is the definitive document of a true American treasure.

"We all have idols," said King. "Play like anyone you care about, but try to be yourself while you're doing so."

The Life of Riley Original Soundtrack, available digitally on May 20, 2014, carefully follows the specifically chosen music sequence used in the film. The soundtrack contains career spanning songs as featured in the movie from his 1951 hit "3 O'Clock Blues" to his 2000 GRAMMY© winning duet, "Riding With the King," plus two live songs never available on digital or CD "Walking Dr. Bill" and "Sweet Sixteen."
Official Website and Screening Tickets:
http://www.bbking.com/

Posted by Michael Shinafelt at 4:11 AM