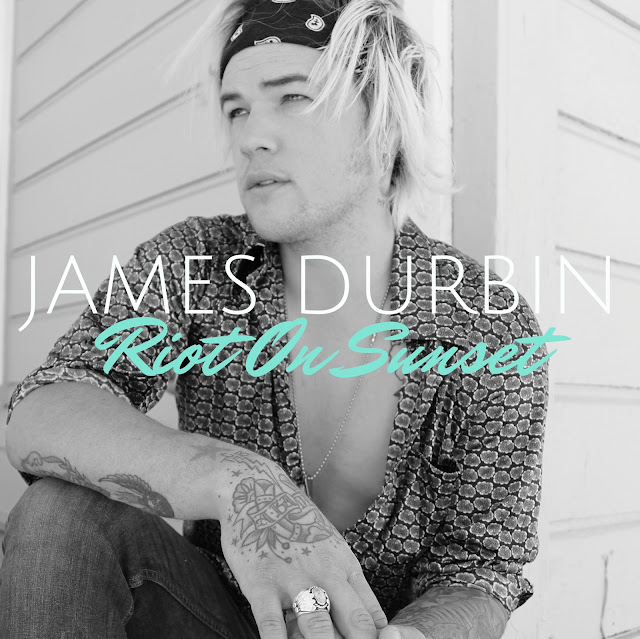 James Durbin left a lasting impression placing fourth on season ten of American Idol. Not only because he was one of the few contestants who performed rock to perfection, he was the only contestant ever on the show to have autism.

His debut album the rock oriented Memories of a Beautiful Disaster was a hit, which was followed up with the pop flavored album Celebrate, which was a departure from what Durbinators were hungry to hear from their idol.

Well James is back and ready to rock with his first new music in over two years Riot On Sunset.

In my opinion this is James best work as an artist to date mainly because the music is 100% pure Durbin. Durbinators rejoice, here's James!

MS: Fine, I love your latest Riot On Sunset, after Celebrate it's great to hear you rocking out again!

JD: Not to take anything away from Celebrate it's a great album. But it's more of a studio album and it's not something that I like to play live too much. It still holds up, it's just not a James Durbin album necessarily.

MS: I was going to ask how you felt about it, and you beat me to it. (laughs) Are you still going to experiment with different types of music in the future?

JD: Yes. I am influenced by a wide array of music genres and artists. Everything from James Brown, Maroon 5 to Judas Priest. You might even find a Bieber track on my iTunes. (laughs) It's different songs for different reasons. The Bieber song in question has incredible production. As far as the kind of music I am making now, I am definitely back in my comfort zone.

MS: My favorite song off of Riot On Sunset is the title track. Was that inspired by your performing at the The Viper Room?

JD: You know I actually wrote that song when I was twenty. Probably a good year and a half before all the "Idol" stuff happened. I had started a band with some friends called Hollywood Scars and I was looking up different things about the Sunset Strip I wanted to embody that in a song. That ended up being Riot On Sunset which was an actual event that happened in the 1960's basically it was about kids wanting to have freedom of expression, to be yourself whether "the man" has anything to say about it or not. I kept pushing for the song to be on my other two albums and the label kept saying it's not good, we don't like it, it's not going on your album. When I was in Nashville working on my second album with James Michael, we had a talk about it, he said to me: "This is one of those songs that you write once in your lifetime, it's on of those songs that comes from somewhere else." That message spoke to me to open myself up to letting songs pass through me.

MS: Seriously?! I can't believe the label said those things to you about that song.

JD: There ended up being a struggle with it actually, after I left the label. They were going to keep it and not give it back to me. It fell in with my publishing deal with them. The fact that somebody can say they own a song that they don't think is good enough to go on a record is just stupid. We fought really hard and that's the one thing I got out of my termination deal with the label. This incident falls right in line with the story and vibe of the song, standing up for what you believe in, regardless of the fact that somebody tells you "No."

JD: Yeah, yeah it's doing pretty good right now on the Loudwire Battle Royale. It's gone up to number one, it's still in the top five on the liter board. That's all thanks to my awesome adoring fans, they're truly something else.

MS: They sure are! Every time I tweet about you, whoever runs J.D's Outcast Army is on it! They re-tweet me within five minutes usually.

JD: When I was in Florida on a layover I went to Walmart at one in the morning and tweeted something about it. Immediately after I did it there were like four or five responses to it. It's a blessing to have such devoted fans.

MS: Here's a somewhat off the cuff thing that I've always wanted to ask you. Have you ever been skydiving?

JD: I have not. They were trying to get me to skydive to promote my single Parachute off of the Celebrate album, yeah, that wasn't going to happen. Now I would have totally done the indoor skydiving at Universal City Walk.

MS: Does skydiving scare you?

JD: It depends on what mood I'm in. (laughs)

MS: Speaking of City Walk the last time I saw you was there performing for the organization Autism Rocks. It was a great show, you are always good live, how did you feel about that night?

JD: It felt great! The idea of the organization is to bring awareness to autism. That it is not something to be feared. All we want is to be loved and accepted just like everyone else.

MS: Personally, I accept people as they are, things like that don't scare me.

JD: Good. People may look at us and think we act funny, but we could be looking at you thinking the same thing. (both laugh)

Riot On Sunset is out...now!

Get Riot On Sunset at: