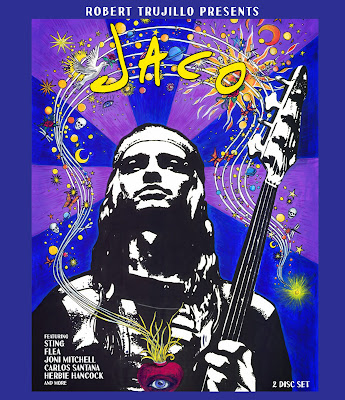 JACO, A full-length documentary film chronicling the life, music and ongoing influence of the mythic electric bass pioneer Jaco Pastorius, is being released on DVD/BluRay on Nov. 27, 2015. Produced by Robert Trujillo (bassist, Metallica) JACO incorporates interviews with musical visionaries including Sting, Joni Mitchell, Flea, Jerry Jemmott, Bootsy Collins, Wayne Shorter, Herbie Hancock, Carlos Santana and many others with never-before-seen photos and films from the Pastorius family archive. This extraordinary film reveals the story behind Jaco's life and music, both as a solo artist and member of Weather Report, the tragic arc of his demise and early death and the enduring influence and inspiration of his artistry and genius.

The DVD / BluRay release is a two-disc set. Disc 1 is the film and Disc 2 Features bonus material: 30 never before seen interviews with Joni Mitchell, Carlos Santana, Bootsy Collins and many more. They talk about Jaco's incredible contributions to music, how he changed the instrument as well as musical boundaries, and also Jaco the person.

JACO had its world premiere earlier this year at Austin's SxSW Film Conference & Festival, and has appeared in many film festivals around the world winning awards at the inaugural Asbury Park Music Film Festival as well as the Athens Film Festival.

The film "(captures) the essence of what made Jaco Pastorius such an influential artist," declared the Montreal Gazette, praising "the glowing words of interviewees and the many recorded and live musical excerpts that he lets speak for themselves" and hailing JACO as "an enlightening introduction to a groundbreaking musician."

"A brilliant film about a brilliant musician. I love every minute of it." - Michael Kurtz, co-founder, Record Store Day.

The DVD / Blu-ray / etc will be distributed in the U.S. by MVD Entertainment Group. In Europe, contact Proper Records and Music Sales Ltd. In Canada, contact Conveyor / Universal

For more information and updates: www.JacoTheFilm.com

The red-carpet, world premier screening of JACO will take place at The Theatre at Ace Hotel in Downtown LA on November 22nd followed by a concert featuring Robert Trujillo and Mass Mental, Felix Pastorius and Hipster Assassins, special guest performers including Billy Idol, Flea, and more surprise guests to come. Tickets are now available, VIP tickets include a meet and greet with the artists: http://j.mp/1FVqOtJ