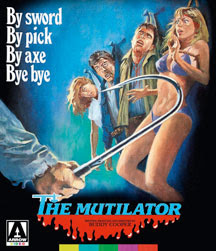 You have heard of Manic Monday, Monday Funday, Monday the beginning of the weekly grind, today July 13th is now "Mutilator" Monday...Yes, I am a horror fan!

Although the slasher film was in decline by the mid-1980s, there were still some grisly delights to be had... and they don't come much grislier than writer-director Buddy Cooper's sickening stalk-and-slash classic The Mutilator! When Ed receives a message from his father asking him to go and lock up the family's beach condo for the winter, it seems like the perfect excuse for an alcohol-fuelled few days away with his friends. After all, his dad has forgiven him for accidentally blowing mom away with a shotgun several years ago... hasn't he? But no sooner are the teens on the island than they find themselves stalked by a figure with an axe (and a hook, and an onboard motor) to grind... Originally entitled Fall Break (watch out for the incongruous theme song of the same name!), The Mutilator has earned a reputation amongst horror fans as one of the 'holy grails' of 80s splatter mayhem due to its highly inventive (and not to say, decidedly gruesome) kill sequences, courtesy of FX wizard Mark Shostrom (Videodrome, Evil Dead II). Finally making its long-awaited bow in High-Definition, The Mutilator has returned to terrorize a whole new generation of horror fans!
Posted by Michael Shinafelt at 6:17 AM No comments:

"Evil Dead" The Mini-Series, Because They Can

OMG! This is very cool news indeed! I remember when I saw the first Evil Dead movie in 1981 with it's unique blend of horror, camp and over the top gore it was unlike any thing I had ever seen before, I was hooked!

Of course I saw the equally loopy and freaky Evil Dead 2 and Army of Darkness.

Well all of you "Dead Beats" get ready here comes Ash vs. Evil Dead. The Starz Network announced its plan to air the 10 half-hour episode miniseries, with the 1981 film's star Bruce Campbell back as Ash and director Sam Raimi executive-producing. Raimi will also direct the pilot. Raise a bloody stump and say Hallelujah!
"I'm really excited to bring this series to the Evil Dead fans worldwide," Campbell said in a statement. "it's going to be everything they have been clamoring for: serious deadite ass-kicking and plenty of outrageous humor."
Raimi added, "Evil Dead has always been a blast. Bruce, Rob Tapert, and I are thrilled to have the opportunity to tell the next chapter in Ash's lame, but heroic saga. With his chainsaw arm and his ‘boomstick,' Ash is back to kick some monster butt. And brother, this time there's a truckload of it."
Set 30 years after the first film, Ash vs. Evil Dead will follow Ash, who has spent the last three decades "avoiding responsibility, maturity and the terrors of Evil Dead," as he is forced to finally face his demons after a Deadite plague threatens to destroy all of mankind. "Destiny, it turns out, has no plans to release the unlikely hero from its 'Evil' grip," states the press release.