It's The Great Violin, Lindsey Stirling 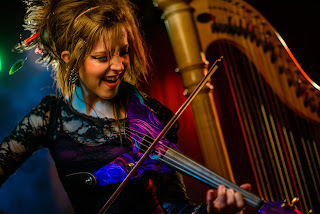 Violinist extraordinaire & YouTube sensation, Lindsey Stirling has hit the road, for the very first to to sold out venues across the United States! She has a few other first too, her self titled album hit number on the iTunes Electronic chart...

Oh, and she dethroned the reigning Queen of YouTube – Her Royal Highness Taylor Swift by passing 137 Million views on her Lindsey Stomp channel.

Here to get spooky is Ms. Lindsey Stirling...!

MS: So, your debut album “Lindsey Stirling” is all original material, correct?

LS: Yes, I was so excited to release it some of the material I wrote some a while ago and some of it I wrote recently.

MS: While I know you must love all the songs you put on there, give me some that are highlights for you personally.

LS: “Zi Zi's Journey” was one I wrote a while back, it was fun for me because “Zi Zi” was my nickname, It has the feeling of an animae film theme song. In fact I want to do an animae video for it with the character “Zi Zi” resembling me. The other newer one I wrote is a Halloween-esque once called “Moon Trance” which I am shooting the video for soon.

MS: Tis' the season, so I have to ask, are you a big fan of Halloween?

LS Yes! I love dressing up in costumes, I make my own for my videos, I made my first Halloween costume when I was eight. I was a kangaroo, I made the ears the feet, the whole body and of course the pouch so I have people put my candy in it. When I look back I kind of go “Wow that was pretty impressive for an eight year old”. (laughs) One year my friends and I dressed up as Fairy Nerds, we had broken wands held together with masking tape. (laughs)

LS: Oh no, my imagination is way to active, I would lay in bed at night awake and freak out! (laughs)

MS: Mine was like that when I was in my twenties too, I think you will get over it when you are older (laughs) What are some of the images and ideas you have for your “Moon Trance” video?

LS: I'd like it to be something like the “Thriller” video with a lot of people dancing looking like creatures, I love that song and think doing something along those lines will look great and be a lot of fun.

Put yourself in a "Moon Trance" with Lindsey at:

Posted by Michael Shinafelt at 2:45 PM