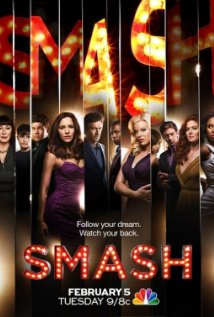 Although I enjoyed Season One of "Smash" and sure I was going to watch the Second Season. I was not one of those people who was totally blown away by it.

Sure it had one of the best ensemble casts on TV and some knock out musical numbers, but there was something that did not quite push it to the greatness that it could be, very entertaining for sure, but that extra something just was not completely there that matched the ambition of the show.

Well, jump back! Season Two is off to an amazing start! With a two hour premiere that is already more dynamic and stakes claim to the ambition that was almost realized from Season One.

1) Jennifer Hudson as "Veronica Moore" - J-Hud is a great addition to the show and, was great herself in it.

2) Katherine McPhee's "Karen Cartwright" - new found jaded and world weariness, is a much needed change from that wide eyed girl from Season One.

4) Julia (Debra Messing) shacking up with her writing partner Tom (Christian Borle) - so "Will & Grace" with a twist and an edge.

6) Liza Minnelli as an upcoming guest star and the return of Bernadette Peters. Enough said.

7) Visibly higher production values, they added greatly to a show that is as big as this.

8) Jack Davenport (Derek Wills) this is a personal thing, ahem.

The funniest thing that happened to me whilst watching the "Smash" Season Two premiere was I had totally forgotten, until I saw them duet together that J-Hud and K-Mc had both been on "American Idol" they have both risen so far above their humble beginnings they no longer need to list the show on their resume'...

Looking forward to the next episode, bravo everyone !

Posted by Michael Shinafelt at 9:34 AM