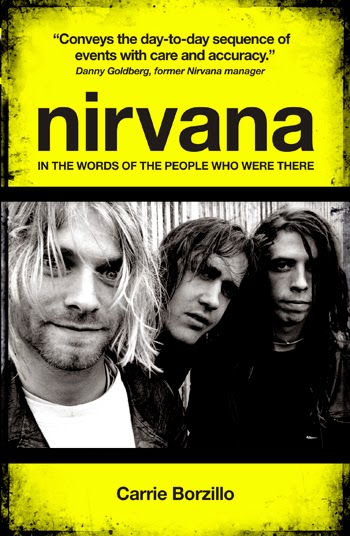 Carlton Books has announced the re-issue of author/journalist Carrie Borzillo's first book, 2000's Eyewitness "Nirvana: The Day-by-Day Chronicle," with a new cover, title, and design as "Nirvana: In The Words of the People Who Were There" on April 1, 2014 to commemorate the 20th anniversary of the tragic death of Kurt Cobain.
The book is on sale everywhere. Mr. Borzillo is selling a limited number of signed copies direct to the fans via her official website with a percentage of each autographed copy purchased being donated to the American Foundation for Suicide Prevention.
Being a Nirvana fan I had to satiate my curiosity and chat with another fellow fan - one that actually authored a book on the subject, here is what transpired...

MS: So I just recently learned, with the re-issue of your book that you are a Nirvana fan.

CB: Yes, but I would never put myself up there with the real hard core Nirvana fans. I was a music journalist so I knew them professionally, and of course being a music journalist I was passionate about music and I loved them, but those real hard core Nirvana fans who are not journalists and do not work in the industry - the just love Kurt Cobain so much! Of course I'm a fan but those real ones can recite every lyric, I sometimes forget what I wrote in my own book, OK? (laughs)

MS: I'm a fan like you are a fan too, I completely love their music and what they stood for but, I can barely remember some of the things I write either. (laughs) Yeah my over the top fan days are long gone.

CB: It's great to feel passionate about music and all of that, but it's not like when you were a teenager or in your twenties.

MS: When I first listened to Nirvana their music used to hit so many deep emotional triggers for me as I have grown older I still love the music, and it still hits certain things for me, but now I look at it more as great music, it's not as emotional now.

CB: It's hard for me to listen to Nirvana still without feeling, at least for me, that huge sense of sadness. When he sings you can really hear that struggle and inner turmoil, it comes out in every word he says, every lyric, every guitar strum is so full of pain, it's hard to listen to.

MS: I'm from the Seattle area by the way.

CB: Oh Wow! Were you around when Kurt's suicide happened?

MS: I was in Los Angeles actually.

CB: I lived in Los Angeles but was flown to a party in Seattle, and was there the day it happened, what a fluke, huh? The biggest news story of my career probably. What timing, weird you know?

MS: Personally I think Kurt Cobain was the last iconic figure we will ever have in rock music.

CB: Absolutely! He was the last true tortured artist who actually had something important to say, that changed pop culture and the music industry, and flipped everything upside down. He made the un-cool people, cool, the misfits became the popular kids. He made it OK to be different and brought alternative music to mainstream. That wasn't really his intention and he honestly struggled with his being indie, cool and underground and all of the sudden that becoming the biggest commercial thing.

MS: I'm sure it was a surprise.

CB: There will never be that again, and if someone does come out again who is like a Kurt Cobain figure, we've got to start counting his days. Those true artists who are coming from a deep lace of pain and suffering are not long for this world. Kurt was never going to live past twenty-seven I think.

MS: What did you think about those who were trying to pin Kurt's murder on Courtney Love?

CB: This happens with anyone who is as big of an icon as Kurt Cobain. It happened with Jim Morrison, it happened with Elvis Presley, the only person it didn't happen with was John Lennon because that was a real clear cut incident with witnesses and everything.

MS: No debating that one.

CB: Because Kurt was such an icon and Courtney was around we he committed suicide. Of course there is going to be all these theories and mysteries, it was clear cut suicide. Listening to all of the conspiracy theories was fun, that Courtney hired somebody to kill Kurt. You know it wouldn't surprise me if Courtney ever said, or had a conversation with someone saying: "I want to kill my husband." But in this case he did this alone.

MS: Why do you think there was some doubt in people's mind?

CB: One of the facts is that the level of heroin he had in his system would not have allowed him to pull the trigger on the gun. The thing is, that is true unless you are a super junkie, Kurt was a super junkie. His tolerance level was higher than the average junkie. I mean if did that much heroin I'd be dead in a second. People always say: "Well Doctors say it's impossible" - Yes, Doctors do say that, but there is a but there, if your tolerance level is as high as Kurt's then it is possible.

CB: With the reissue I didn't want to just capitalize on this horrible tragedy that happened, I wanted to give back and am donating some money to the American Foundation For Suicide Prevention, if you buy singed copies through me on my site. It's great to celebrate his life right now, we are remembering someone who contributed so much to the music industry. But let's bring it back to what really happened: drug addiction, suicide, depression...that's what was really going on with him. Anything I can do to shine a little light on that is what I want to do.

Buy an autographed copy of "Nirvana: In The Words Of The People Who Were There" via Carrie's website and give back at: http://www.carrieborzillo.com/

Posted by Michael Shinafelt at 1:29 PM