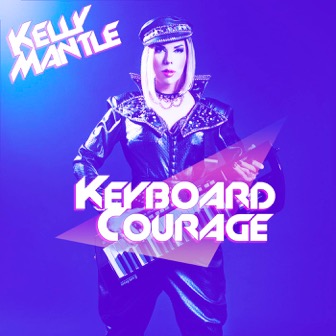 Cyber-Bullying is a terrible thing, I myself as a public person have been on the receiving end of it. Like Kelly Mantle, I too am able to brush it off. However when you are young and have yet to develop coping skills, it can lead to devastating results - Here is the 411 on Kelly's single Keyboard Courage.

First, Prince William and wife Kate Middleton announced plans to tackle cyber-bullying; now, a queen is joining the fight.  RuPaul’s Drag Race’s Kelly Mantle’s new pop track, “Keyboard Courage”, is intended to be an anthem for anyone who has been harassed or stalked online.  “I’ve been called every name in the book,” she reveals.  “One person tweeted ‘Kelly Mantle is so ugly.  She looks like a burn victim going through chemo.’  Luckily, Kelly’s strong sense of humor allows her to brush off many of the personal attacks, but she wrote the song after meeting young fans being victimized online by kids in their schools. “Not everyone can laugh it off. It’s a scary thought that someone’s heartless, mindless words could drive another person to take their life.”  Kelly Mantle’s  “Keyboard Courage” is available on iTunes now at https://itunes.apple.com/us/album/keyboard-courage-single/id1052893996.
Keyboard Courage

“My hope is that Keyboard Courage can be that song kids listen to and be reminded to not get discouraged by online bullies,” continues Kelly Mantle from her Hollywood home. Produced by Steven Phillips, who also produced Mantle’s last album Satellite Baby,  “Keyboard Courage” is a high energy, 80’s inspired pop track.  It’s fun but with a powerful message.  The lyrics include actual negative comments that Kelly Mantle has received.
It isn’t the first time Kelly Mantle has reflected on real life in her music.  She followed her elimination from RuPaul’s Drag Race with a song called (what else?), “Eliminated”.
“One of my favorite things to do is to sit down with my guitar or at my piano and create a song about something that just happened to me,” she explains. “I get off on turning life experience into lyrics.  Ya know, figuring out how the rhythm behind the words can convey what happened.  I’m all about turning life into art.”

Kelly Mantle’s  “Keyboard Courage” is available on iTunes now at https://itunes.apple.com/us/album/keyboard-courage-single/id1052893996.   For more information, visit  KellyMantle.com.
Posted by Michael Shinafelt at 5:14 AM