Historical: The Films of Robert Mugge

MVD Entertertainment Group to release the films of Robert Mugge

"Films of the documentarian Robert Mugge are cultural reference books... Documents of a flourishing below-the-radar culture... They are archival records as well as entertainments."
- Stephen Holden, The New York Times

Check out these markers of time & place, by filmmaker Robert Mugge

Since 1973, Robert Mugge has made more than 30 films, the majority of which have focused on music and musicians. According to Mugge, "In my films, music frequently serves as a leaping-off point for discussions of social issues, cultural issues, political issues, even religious issues. In fact, I tend to see music as a metaphor for the human spirit." 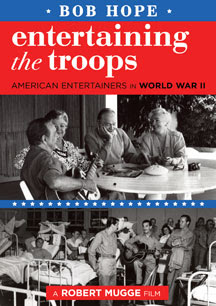 For example, in Bob Hope - Entertaining The Troops(coming to DVD on June 9th), Mugge pays tribute to hundreds of American performers who assisted the military in World War II. Included are rare period performances by the likes of Bob Hope, Bing Crosby, Jack Benny, Dorothy Lamour, Frances Langford, the Andrews Sisters, Danny Kaye, Lena Horne, and Mel Blanc, as well as a 1988 reunion of Bob Hope's WWII troupe of performers. 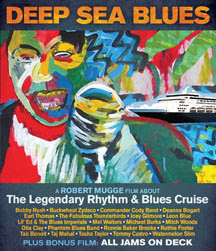 Mugge has made documentaries about bluegrass, reggae, and Hawaiian music and has done films centered on Rubén Blades, Sonny Rollins, Robert Johnson, and Gil Scott-Heron. He's done several movies on the blues including Deep Sea Blues (on Blu-ray July 15th), a rocking portrait of the 2007 Legendary Rhythm and Blues Cruise to the Caribbean. As a bonus, this two hour film also includes Mugge's 96-minute All Jams On Deck, shot on the October 2010 Pacific cruise.

Another blues film, Last of the Mississippi Jukes (coming to DVD later this year) is full of high-powered performances by Alvin Youngblood Hart, Chris Thomas King, Vasti Jackson, Bobby Rush, and Patrice Moncell. However, it's ultimately a sad film. It starts off with a brand-new club in Clarksdale, Miss., Ground Zero Blues Club, which is co-owned by actor Morgan Freeman and Clarksdale Mayor Bill Luckett and which intentionally evokes the style and spirit of traditional jukes. But it ends at the Subway Lounge in Jackson, Miss., shortly before that legendary club closed. At the end of the film there's hope that the Subway would be renovated and revived. However, due to structural problems, the building was eventually demolished.

Giving Up The Ghosts: Closing Time At Doc's Music Hall (on Blu-ray September 29th), is a feature-length music documentary exploring the twin careers of respected physician and musician Dr. John Peterson and the music and arts venue he owned and helped operate in downtown Muncie, Indiana from 1992 to 2012. The film alternates a final performance at his Doc's Music Hall with assorted interviews and related activities, including a ceremony to "free" the building's ghosts.

Mugge's films have earned him high praise from publications including The Village Voice and The New York Times, with Frank Scheck of The Hollywood Reporter writing, "Mugge has, during the past 25 years, established himself as the cinema's foremost music documentarian ..."

"I tend to pick subjects that interest me and about which I'd like to know more" he continued. "Making a particular film becomes an adventure in which I get to learn more about a chosen subject, while simultaneously sharing with others much of what I've experienced." This quest for knowledge has drawn him to make films about reggae, zydeco, gospel music, jazz improvisation and, most recently, the historically rich region of Bucovina in northern Romania and southern Ukraine." Says Mugge. "That was certainly something I knew nothing about," he said of the Eastern European region, to which he ventured with a film crew that included Diana Zelman, now his wife, a filmmaker in her own right who has helped to produce all of his films since 2005. The result, Souvenirs of Bucovina: A Romanian Survival Guide, is coming to DVD on September 29th.

Mugge, takes pride in never having had to make a film that he did not want to make. "I never stop working," he proclaimed.
"It is an honor to be working with Robert Mugge," said Ed Seaman, COO of MVD. "Most of us have been fans of his work for a long time and recognize the integrity in not only the filmmaking and recording, but of the subject matter. We feel it is a perfect match, considering our connection with music and the arts in film."
Mugge states:
"Over the past few decades, my documentaries have been released by a variety of companies. Now, I am thrilled that a majority will be released worldwide by a single distributor, and that that distributor will be MVD Entertainment which has a unique interest in, and understanding of, music-related films. From some of my more highly regarded portrait films (SUN RA: A JOYFUL NOISE, THE RETURN OF RUBEN BLADES, and BLACK WAX with Gil Scott-Heron), to films on important American music scenes (THE KINGDOM OF ZYDECO, LAST OF THE MISSISSIPPI JUKES, PRIDE AND JOY: THE STORY OF ALLIGATOR RECORDS, HAWAIIAN RAINBOW, DEEP SEA BLUES, and RHYTHM 'N' BAYOUS: A ROAD MAP TO LOUISIANA MUSIC), to some of my most recent and more eclectic docs (SOUVENIRS OF BUCOVINA: A ROMANIAN SURVIVAL GUIDE, GIVING UP THE GHOSTS: CLOSING TIME AT DOC'S MUSIC HALL, and the forthcoming ZYDECO CROSSROADS: A TALE OF TWO CITIES), I could not be happier that much of my work is receiving impressive new presentations, complete with beautiful packaging and, wherever possible, generous bonus materials.

Kicking off this new relationship is one of my favorite of my own films, ENTERTAINING THE TROOPS, which recounts all the ways in which American entertainers supported Allied efforts in World War II. Perhaps the most satisfying part of this profect for me was becoming friends with the late singer, actor, and humanitarian Frances Langford. It was she who pulled together the reunion of Bob Hope's World War II troupe of traveling performers which forms the centerpiece and climax of the film. At the time we filmed that reunion at Bob Hope's North Hollywood home with Bob Hope, Frances Langford, dancer Patty Thomas, and guitarist Tony Romano (comedian Jerry Colonna having already passed), Ms. Thomas was 65, Ms. Langford was 75, and Mr. Hope was 85. There was something quite magical about these aging yet still warm and witty stars reminiscing about the idealistic exploits of their youth; especially about their repeated visits to the European, North African, and South Pacific fronts where they risked their lives to remind war-weary soldiers, sailors, nurses, and more how much people back home missed them and appreciated their sacrifices. Conducting such interviews, and spending a year and a half locating and editing together relevant footage from that extraordinary period in American and world history, was a rare experience for me, and I am extremely pleased that MVD is once again making the film available along with 25 minutes of powerful out-takes from the Bob Hope troupe reunion."
Posted by Michael Shinafelt at 8:16 AM