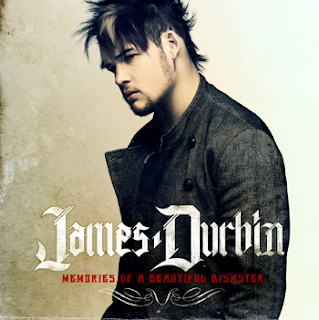 Hey "Entertain Me" peeps remember my chat with James about his Rock-N-Roll fantasies?

Well here is an update on the rockin' "American Idol" finalist -


American Idol’s James Durbin Cracks Top 10 on Billboard’s Rock Album Chart with Debut Album, Memories Of A Beautiful Disaster
First Two Singles Impact Rock and Top 40 Radio
Revolver Magazine names James one of the “100 Greatest Living Rock Stars”
December 2011- Los Angeles, CA – American Idol finalist, James Durbin, is celebrating a whirlwind year with the release of his Wind-Up Records debut album Memories Of A Beautiful Disaster as it cracks the Top 10 on Billboard’s Rock Album chart at #8 and #36 on Billboard’s Top 200 Album chart.
Memories Of A Beautiful Disaster features not one, but two lead singles with the power-charged ballad “Love Me Bad” at Top 40 radio and the anthemic rock single, “Stand Up” which is a gleaming showcase for Durbin’s signature rock-star yowl and powerful, energetic voice. The NFL has tapped “Stand Up” as its stadium anthem featuring it on jumbotrons nationwide during its games this Fall/Winter season. James will be performing with his band during half-time shows at various games this Winter including the Atlanta Falcons game on December 15 and the San Francisco 49ers game on December 19.
People magazine gives Memories Of a Beautiful Disaster a 3 out of 4 star review and says “Durbin is one of the best voices to come out of Idol. His debut packs metallic muscle.” In addition, Revolver magazine has named James one of the “100 Greatest Living Rock Stars” alongside other rock icons including Ozzy Osbourne, Nikki Sixx, Gene Simmons and Dave Grohl.
Unforgettable performances on the Idol stage with legends such as Judas Priest and Zakk Wylde led Durbin’s own “Idols” to support the rocker’s first ever release. Mick Mars of Mötley Crüe, songwriters James Michael (Sixx A.M, Mötley Crüe) and Marti Frederiksen (Aerosmith, Buckcherry, Ozzy Osbourne) along with Swedish rock band Hardcore Superstar all contributed to the making of Memories Of A Beautiful Disaster. Durbin, who co-wrote five of the albums tracks exclaimed it was “surreal” to be working with this bevy of rock royalty and recalls, “When Mick Mars started shredding on his guitar I literally lost my mind.” The long-time Mötley Crüe fan continued saying, “He’s a true rock legend and he’s playing on my record. It doesn’t get any cooler than that.” Mick Mars echoed the same fervor, “It was sick to have played on James’ debut album. To be the only featured guest artist on the record was really cool as I know a lot of others wanted to be on it. James Durbin kicks ass, he’s the real deal.”
On American Idol, James Durbin waved the flag for rock and it was that devotion to rock that helped him overcome his private struggles with tourette’s and aspergers syndrome. He touched the hearts of people everywhere while on the show, and with the release of Memories Of A Beautiful Disaster he is proudly waving that flag high again.