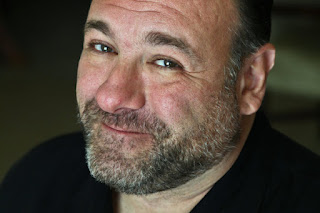 The news that James Gandolfini had died of a heart attack yesterday in Italy caught everyone by surprise. Mainly because the Emmy Award winning actor for his signature role of Tony Soprano on "The Sopranos" was only fifty-one years old.

Although I have never seen "The Sopranos" - I know, my friends tell me I should and that they are sure I would like it, so now I will. There are plenty of other things I have seen Mr. Gandolfini in, and he was always  one of the if not the only highlight.

I will never forget seeing him playing a gay Hit Man, Winston Baldry in the really lame Brad Pitt, Julia Roberts vehicle "The Mexican". The role was like Tony Soprano with a twist, James got to demonstrate a distinctive and sharp comedic flair.

So if you will excuse me I have a lot of catching up to do and am off to watch "The Sopranos" now...

Tony Soprano: Retarded? What if Jerry Lewis heard you talkin' like that?