"Where The Bears Are" is what they like to call in biz speak an Internet Phenom. IP for short. The season two premiere is coming at you, well, really soon - this Monday June 10th 2013!

Can I get a collective Grrrrrrrrrrrrrrrrrrrrrrrrrrrr! In the house we have none other than Ben Zook aka "Nelson" and producer extraordinaire of the series. Oh and FYI I make an appearance on the the show this season. It's time to Zook out, with Ben!

MS: So Ben season deux of "Where The Bears Are" is coming up this Monday?

MS: It's also another murder mystery.

BZ: Yes, it's another murder mystery this season, yes the Bears find themselves involved in yet another murder. This one involves a friend of Reggie's who he went to college with, who is a politician, and he ends up getting shot. So The Bears have to figure out who shot him.

MS: Ahhhhhhhh, there's a formula here, do you think lightning will strike the second time?

BZ: I hope so! We realized, we have to have another murder. That's what drives the show really, a murder, looking around for clues, stumbling onto things and one clue leads to the next situation. The formula worked last season so we thought we should stick with it, that's what we know, zany comedy! (laughs)

MS: You have someone I know, and obviously you know on the show this season, Margaret Cho.

BZ: I've known Margaret for years. We've known each other from playing clubs, gigs and stuff. She actually did an independent feature we were in together back in the 90's called "Can't Stop Dancing" which is about a bunch of lame Theme Park Dancers who move out to Hollywood to make it big. It didn't get distribution and is a cult thing. She and I were both in the dance troupe, so we wore spandex and stuff, and we've been friends ever since. She wanted to do the show last season, but ended up booking a movie, this season she was able to do it.

MS: It's funny when I did the photo blog from the set at The Faultline, Joe (Dietl, The Director & Ben's partner) thanked me for not giving anything away. I really could not tell what was going on anyway.

BZ: Yeah, I don't think anyone could really pick up much of what was happening. I don't even think we knew what was actually happening. (laughs)

MS: Only new character additions, that's what I could have figured out.

BZ: I believe you actually end up being seen on camera.

MS: Well there is one good scene where somebody cruised me and I cruised them back so maybe that's the scene that's in there. 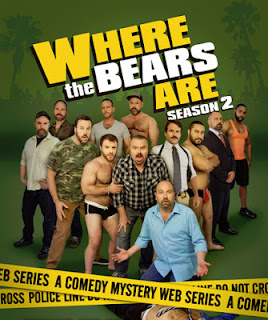 MS: I saw that Cyril, the killer from last season returns for season deux.

BZ: Well Cyril does show up in the Christmas episode we shot for DVD as Santa Claus. So this season we sort of find out why he ended up at the Christmas Party, and what's going on with him. We're not really sure, is he, or isn't he out of prison, what's going on? Is he a figment of Nelson's imagination? So it's sort of a Mind Fuck, as to what the Hell is going on with Cyril. It's part of the mystery this season.

MS: From the looks of it, it seems like Nelson and "Hot Toddy" are having an open relationship.

BZ: You know what? In season two....I can't really reveal much. Our relationship definitely goes to a different level.

MS: Well I thought last season was really funny and I'm looking forward to the premiere of this one.

BZ: Well Thank You. We had a blast doing both seasons, and we're thrilled that people like the show.

MS: You also have Rick Copp on board who was one of the writer's of "The Golden Girls"

BZ: He wrote for the show at the age of twenty-four. He started writing for them in the sixth or seventh season.

Posted by Michael Shinafelt at 7:19 AM