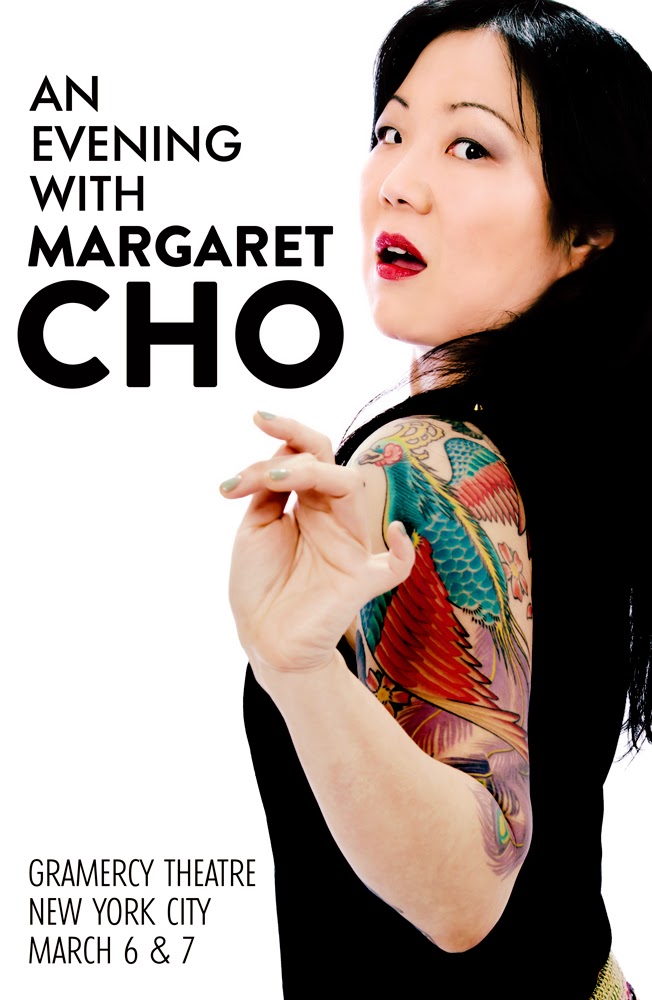 Margaret Cho has always been a rule breaker who has marched to the beat of her own "Little Drummer Boy" - This year and 2015 are no exceptions....It's Cho Time!

Three time Grammy and Emmy nominee, comedian Margaret Cho has announced she will make her return to New York City in March to film her brand new Stand Up Comedy Special at The Gramercy Theater. These shows in the Big Apple will be her first in over 2 years.

Margaret has been criss-crossing the country with brand new material over the last several months and said: I'm so thrilled to announce that I will be filming my new special at the Gramercy Theatre in NYC on March 7th (additional show on March 6 will not be filmed) and I want you to come! This is my most exciting show to date and I can't wait to share it with you. This show is all about the insanity in the world – it’s called “there’s no “I” in Team, but there is a “Cho” in Psycho.”   I've been saving NYC just for this, so please join me for this party. It's going to be legendary!

VIP tickets will also be available and include a Meet & Greet and picture with Margaret after the show.  Show info is posted on http://www.margaretcho.com/

Margaret has toured all over the world and Bust magazine attended her show in Paris saying: “Ms. Cho put on a hysterically funny 90-minute set.  It was the most explicit and painfully honest performance I’ve ever seen from her giving it 100%.”

Recently, Margaret has been living in her hometown of San Francisco and giving back to the homeless community in honor of the late Robin Williams.  Margaret was so inspired by Robin’s activism that she has decided to get out on the streets herself in his honor for the work he did throughout his life with Comic Relief.   “I found that I could not stop grieving Robin Williams and I spoke to my friend Michael Pritchard, who is a mutual friend of mine and Robin's and he said, "Don't grieve Robin, be Robin". So this is what I thought I should do. I should go and make a little Comic Relief, a little baby one. And I encourage anyone to do this in their town.”

Dubbed the #BeRobin campaign, you can follow Margaret on Twitter for event announcements @margaretcho.  Margaret will continue her busking for the homeless 2 days a week in San Francisco until the end of the year.

Margaret Cho is walking the streets to raise awareness for one of her hometown, San Francisco's more pressing problems: homelessness.
Margaret stepped out on Monday to begin what she says will be a daily, two-month commitment to busk on the streets of San Francisco to raise money for the city's vast homeless population
Armed with her guitar case, Cho hit the road and busked a move with a handwritten sign that says, "If you have, give; if you need, take (please remember your fellow man)."
"We have a small amplification system and big hearts," Cho said on Facebook over the weekend. "We will make videos and I have some secret amazing legit superstars who will come and sit in with us. The homeless problem in SF is out of control and this is the least we can do."

What street corner will Margaret work next? Find out with her daily updates on Twitter.

Busk with Margaret in San Fran on Twitter:
https://twitter.com/margaretcho
Posted by Michael Shinafelt at 6:05 AM No comments:

Inside The Mind Of: Punk Princess Ariel Beesley

Posted by Michael Shinafelt at 3:31 PM No comments: